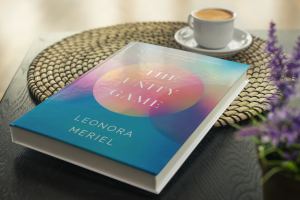 Available in hardback, paperback and eBook

Buy now on Amazon Buy e-book direct from Leonora Meriel Request a signed paperback or hardback
Synopsis
What if the Earth you knew was just the beginning?

A New York banker is descending into madness.
A being from an advanced civilization is racing to stay alive.
A dead man must unlock the secrets of an unknown dimension to save his loved ones.

From the visions of Socrates in ancient Athens, to the birth of free will aboard a spaceship headed to Earth, The Unity Game tells a story of hope and redemption in a universe more ingenious and surprising than you ever thought possible.

Metaphysical thriller and interstellar mystery, this is a ‘complex, ambitious and thought-provoking novel’ from an exciting and original voice in fiction.

“Elegantly written, expertly crafted and a moving message. I found this book very hard to put down. Moving and poignant.”

“An engrossing, unique, and totally bizarre tale! I could not stop reading it once I started. Such a beautiful take on the afterlife, and its connection to those still living. A unity game, indeed!.”

The Manhattan cityscape flickered yellow and unreal beyond the huge, darkened windows of the bank. Pointed tips of metal strained upwards; geometric shapes and angles multiplied within mirrored illusions of space. Behind the glass surfaces, tiny faces and screens were visible; hunched workers and cleaners moving rhythmically over seas of night-time carpet.

Within the walls of the bank, David pulled his gaze from the hypnotic glow of the surrounding buildings, and glanced at the time on his computer. He stepped out of his cubicle and looked around the floor to see who else was working late. Rows of identical grey boxes stretched out over a dull-green carpet, covering the length of the room. Just a jumped-up factory floor, he thought, and remembered the first time he had walked in there, his heart smashing into his chest like a jackhammer. That incredible moment when he knew he had made it. New York. He had made it. He reached his hands up above his head and punched the air with both fists, as if he was pounding on a huge door, screwing up his eyes and then opening them.

A glow caught his attention in the far corner – a couple of figures bent low over spreadsheet screens. The Managing Directors’ offices were shut up with their lights off. It was probably just a pair of analysts trying to impress their MD, or some rush project which had them pulling an all-nighter. Better get out now if they can’t take it. It’s not going to change for the next forty years.

David let his hands drop and walked to the end of the corridor, scanning the other compact squares of computers and papers. They all looked the same as his. Financial calculators, notebooks of scribbles and sums, files on companies, black headpieces plugged into black, heavy phones. Just a row of underpaid Vice Presidents turning daily into the hardened, overworked assholes they idolised. But he’d made it. They’d all made it. The group of Wharton post-grads on the fast-track to power and politics; even the few who’d struggled up from nowhere like him. There was a constant thrill of testosterone around the floor. We’re going to be the super-rich. We’re going to control the financial world. We are winning the game.

He looked out of the far window of the office – a glass wall facing up towards midtown Manhattan. The Chrysler on the right, mostly full of lawyers, Met Life straight ahead with Park Avenue threading through the bottom and Grand Central Station hidden below. Further up, Lexington and the Upper East Side, and the UN – that strange, grey cereal box looming dismally over the East River.

Not that he cared. He loved the city for what it would give him in the future, not now. He loved the paychecks deposited straight into his bank account, most of which went to cover the overheated studio he rented on East 78th. The bonus he would use to invest in companies he had been researching. The thrill he could already feel of owning the city, pumping blood into every cell of his body so that he felt more than alive, as if he were standing above the world, far, far bigger than anything on the planet. Full of power, strength and drive.

Calm down. Still a few years to grind out before he was at the top. But he had that feeling pulsing through him that would get him there. They all did. None of them would be on Wall Street if they didn’t have it – that maniacal urge to win the game. It was more than just succeeding. It was the desire to take everything. It was almost transcendent, the pleasure he felt from being faster, smarter, better, stronger, more hard-working; a relentless pulse driving him towards his goal. Winning everything. Total power. Having it all.

David glanced again towards the analysts at the far side of the room. Poor bastards. He’d been through that stage back in Toronto. Long, thankless hours spent on a project and always some VP ready to come and take all the credit. One mistake, and there was a line of graduates desperate to get their foot in the door. Checking, double-checking, working insane hours for the lowest paycheck on the floor. Bottom of the pile. But bottom of the right pile. The winning pile.

Enough. He ran his hand through his short, black hair and pulled his tie loose at the neck. Then he squinted a few times, clenched and unclenched his fists to get the blood pumping, and sat back down at his desk. He clicked up the Excel file he had been working on and started to go through the calculations from the beginning. He wanted to send the file to Jeff before he left tonight, so Jeff would see he’d been there past midnight. And he’d make sure he got in early tomorrow; before Jeff even, who was usually at his desk by seven. Then he’d get one of those off-hands that would keep him going – “Someone’s on the fast track to MD,” or “I’d better find an excuse to fire you before you work me out of my job.” He’d store these comments up, keep them close by and use them to get himself out of bed after three or four hours’ sleep, to drive him when he was pounding a seven-minute mile at the gym, even when he was masturbating to crash himself into a caffeine-buzzed sleep. It was all he had right now. That, and his dream.

Finished. He’d checked the numbers three times; they all added up. A $75 million high-yield loan arranged with three other investment banks as a club deal; added to the $150 million loan they still had on the books from five years back. There’d been some road-bumps in the past, but it was a good company, solid growth rate, building new operations in two states. It wasn’t one of the hot technology start-ups multiplying all over the West Coast, but Jeff would approve it. He might even take him along to the next investors’ boondoggle. Now that would be a hit. The guys on the floor would hate him for that. He smiled at the thought of them watching him win. Pure. Straight. Winning. Bunch of loser assholes. He’d work even harder. Sleep less. He was going to get all the big clients. All the big deals. He was going to make SVP this year. He was going to get the biggest bonus on the floor.

Done. He sent the e-mail to Jeff and logged out of his computer. He packed up his soft leather briefcase, pulled his Canali suit jacket from the back of his chair and slipped it on. What a beautiful suit. He already looked like an MD in it. He glanced around. Losers. They didn’t have a chance. He’d outwork them all.

He switched off the computer and made his way down the corridor of cubicles, towards the glass doors and the silver wall of elevators set on a polished stone floor. He rode the twenty-seven flights to street level and stepped out of the vast, white-marble foyer into the yellow light of a New York evening. Tired, a thrill; almost post-coital. He flagged a taxi on Park.

“78th and York, sir,” he said. Squashed knees in the cramped seat. Turban and beads swinging in the front.

Silence from the driver. The passing streets.

He was winning the game.