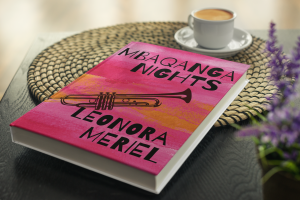 1989. The African Jazz Pioneers are in full swing. Coltrane’s club is hopping. Glasses and plates are pushed aside as the room dances.

When a pair of young music lovers decide to follow their dreams and open a jazz club to host their favourite musicians, they have little idea of what stark choices they will be facing as the political situation heats up and riots tear through the surrounding townships.

With an epic tale that starts in the depths of a Ukrainian shtetl and winds its way back and forth across oceans, history and memory serve to create a personal story of individual choice – and the fate of nations.

Video: Watch Leonora talking about how the novel came into being
Editorial Reviews (1)

“A wild ride that stretches through jazz and history” - Zoe McLeod

Back to Coltrane’s. The opening night theme is speakeasy. Our guests are large-lapelled and wide-hatted. Women are sequinned and beaded. Heels and slim legs, hair waved to shoulders, feathered bands on foreheads. The diners are seated, menus are being studied, Lisa has persuaded the band to stub out the dagga.

She takes to the stage, clutching the microphone.

“Ladies and gentlemen,” her face is shining under the spotlights, framed by wild curls.  “Please welcome to Coltrane’s one of the greatest bands of our own South Africa. A band whose roots go back to the 1950s townships of Alexandra and Sophiatown. A band who grew up with our beloved Miriam Makeba, Dolly Rathebe, Hugh Masekela. Ladies and gentlemen, the fathers of mbaquanga: The African Jazz Pioneers.”

She holds the microphone high in the air to capture the shouts and claps of the audience as the musicians raise their instruments and shift into position: Ntemi Piliso, band leader and tenor saxophone, tall, elegant with a long, smooth face and eyes weary from seeing too much for too many years; Stompie on trumpet, short and powerful; Tim on tenor sax, husband of the intrepid Queeneth Ndaba, band manager and musical advocate; and on trombone, Jasper Cook, the only white member, Natal born, tall and ponytailed. Add to these: Sam, Shep, Fellow, Nkaka, Kay, Bheki, Madoda and Sipho. These are the Pioneers.

They’re ready now, and there’s a hush across the room. Lisa has stepped aside and joined me and Charles in the corner. Huge mosaic lizards are flicking tongues across the walls, there’s a smoke mist that’s getting thicker despite the air vents and then Ntemi says, “One, two, three,” and the sound begins. It’s the soft sound. It’s the first layer. It’s Sipho putting down the rhythm. It captures you immediately. It’s so gentle, it’s like something that’s been in your head all along, and has just started up again. Your head is moving, and your body is moving. Your feet are moving but you don’t notice, it’s so smooth. And then the horns come in, and it’s just the right time, it’s as if you’d been waiting for them too: Ntemi, Tim and Shep, lifting the tune with the new layer. It’s still so soft, but it’s thicker now, and you’re moving more, and people are leaving their food to get up and dance. You can’t help it, it’s a soft, shuffling dance, there’s nothing to it, because you’re not doing it – the music that was in your head and is now out loud is doing it, and your body is just following. And I’m on the dance floor with Lisa, we’re moving together, and Charles is on his own by the wall, a turquoise and gold lizard behind him, and it’s time for the first solo, and Stompie takes it, his trumpet rising high towards the dancers, he’s closed his eyes and the background is like a heartbeat to his song, he’s just telling us his story, and it’s as natural as if we had shared it, his family – sisters and brothers, aunties and cousins, as if we had lived it with him, these trumpet words he is speaking to us, this tale we are sharing.

Because the place Stompie grew up was Sophiatown.